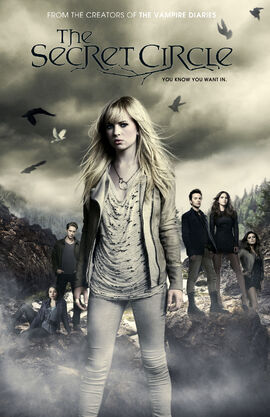 The Secret Circle is an American television series broadcast on The CW Television Network. It was developed by Andrew Miller, based on the book series of the same name written by L. J. Smith. On May 17, 2011, The CW announced they had picked up the pilot as a series.[1] It premiered on Thursday, September 15, 2011.

On October 12, 2011, the CW ordered a full first season of the series, which consisted of 22 episodes.

On May 11, 2012, the CW announced they cancelled the show, which would not return for a second season on Fall 2012, and though there were negotiations for ABC Family to take on the show, the CW revealed it wasn't possible.

Cassie Blake was a happy, normal teenage girl - until her mother Amelia dies in what appears to be a tragic accidental fire. Orphaned and deeply saddened, Cassie moves in with her warm and loving grandmother Jane in the beautiful small town of Chance Harbor, Washington - the town her mother left so many years before - where the residents seem to know more about Cassie than she does about herself. As Cassie gets to know her high school classmates, including sweet-natured Diana and her handsome boyfriend Adam, brooding loner Nick, mean-girl Faye and her sidekick Melissa, strange and frightening things begin to happen. When her new friends explain that they are all descended from powerful witches, and they've been waiting for Cassie to join them and complete a new generation of the Secret Circle, Cassie refuses to believe them - until Adam shows her how to unlock her incredible magical powers. But it's not until Cassie discovers a message from her mother in an old leather-bound book of spells hidden in her mother's childhood bedroom, that she understands her true and dangerous destiny. What Cassie and the others don't yet know is that darker powers are at play, powers that might be linked to the adults in the town, including Diana's father and Faye's mother - and that Cassie's mother's death might not have been an accident.