Pilot is the first episode of season one of The Secret Circle, and the series' first episode overall. In its original broadcast, the episode was watched by 3.05 million viewers.

After a sudden family tragedy, Cassie Blake moves in with her grandmother in Chance Harbor, Washington, the town where her mother lived years before. Cassie quickly starts to learn from her new classmates that there things about her past that she never knew about—like the fact that she and her new friends are all witches, and they want Cassie to join them in creating a new generation of the Secret Circle. As Cassie starts to unlock her new powers, she uncovers a dark side to her abilities and soon comes to realize that with her new found destiny comes a level of danger.

Cassie is run off of the road by another driver on the way home which leads to a flat tire. Unknown to Cassie, her mother, Amelia Blake, is about to see the last of this world. A stranger is outside of Cassie's residence playing with matches as a fire breaks out in the kitchen inside. Cassie loses her mother in what she believes is an accident.

One month later, Cassie, still dealing with her mother's death, is moving to her grandmother's house in Chance Harbor. Cassie meets her new friends during her first day of school: Adam Conant: a handsome boy who seems to have this pull to Cassie, Diana Meade: who is Adam's girlfriend and the leader of the group, Faye Chamberlain: a young and all around rebel, Melissa Glaser: Faye's sidekick, and Nick Armstrong: her next door neighbor.

Unknown to Cassie, this group of kids make up a coven of witches, and try to pull Cassie into the mix so they can all experience the full effects of their magic. They call this the Circle and is only at its best if Cassie joins. Cassie does not warm up to the experience when Faye tries to draw out Cassie's powers by lighting Cassie's car on fire with magic.

Cassie ponders whether she will join them or not, and all while dark secrets surface such as Diana's father, Charles, is the man that was outside Amelia's house. Along with these secrets, Cassie is revealed to be more of a puppet for the adult generation of witches that were thought to have sworn off witchcraft after a bad accident long ago.

Amelia: "My sweet Cassie, I didn't want you to have this life, but destiny is not easy to run from."

Faye: "Adam's a hottie and he really does go with the sad delicate type."

Cassie: "This town, it's freaking sideshow."

Diana: "We're different, you're different."
Faye: "Oh for God's sake, spit it out! You're a witch. You're a full-blooded, hundred percent witch. We all are. There, done."

Cassie: "This is beyond crazy."

Faye: "Don't pretend you don't believe us. Deep down you know it's true."

Diana: "I believe we can do great things with our power. It doesn't have to be bad, but we have to control it." 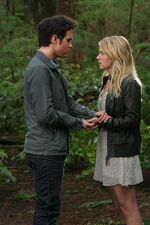