The Secret Circle Wiki
Register
Don't have an account?
Sign In
Advertisement
in: Characters, Season 1 characters, Witches,
and 6 more

John was a member of the Blackwell Family.

According to Royce Armstrong, John is not from Chance Harbor and came into town with one mission: to have children. He managed to catch the eyes of Amelia Blake, Elizabeth Meade, Dawn Chamberlain though he fathered the 2 former daughters and also it was found out in Prom that he used his magic to make the 4 remaining females in the Circle highly fertile that they would each, respectively, get pregnant and have a child to make up the third generation of the Chance Harbor Circle, the one he knew his daughters would eventually join. He was also friends with half the circle and told them they could beat the Witch-Hunters, which lead to the night of Boatyard Fire. He escaped, but his actions had the effect of killing half of the circle as well as getting the survivors' powers stripped. This caused them to keep magic a secret from their children for fear that the same would happen to them. The survivors also split up never speaking to each other ever again and if they did it was not for long. Although they eventually found out about Jake Armstrong becoming a Witch-Hunter since he believed magic is what got his parents killed in the first place.

John had an affair with Elizabeth Meade which resulted in another child. It was mentioned in episode Witness and Lucky that Amelia left John due to his betrayal, but in Prom his daughters especially Cassie find out why her mother did leave and was because he was using the circle through Amelia and would eventually do the same through their daughter.

Its was also found in Family he sired 4 more children in the two circles on the east coast. Three sons and another daughter part of his plan to make a circle of Balcoin blood and also full of Dark Magic. He has three daughters and three sons total. He was trying to get the skull for himself.

John is without a doubt, a master at deception and manipulation. Both with the second generation of the Chance Harbor Circle and with the current generation, he managed to convince most of them to trust him and to follow his lead. He also succeeded in keeping his true motives hidden until it was too late to stop his manipulations the first time and almost too late the second time. He also seems willing to do whatever it takes to get his plan accomplished, such as when he tricked Charles into admitting to his daughter he killed Amelia, or when he poisoned Jake to stop the Adam/Cassie relationship, or when he killed Jane to make the Circle head their anger onto the Witch-hunters. Despite this, he cares about Cassie and Diana, and believed everything he did was for them.

However, John's intention to have his children become a Circle of Dark Witches was to teach and control them, making him, already a most powerful witch, even greater with six dark witches at his command. Those who knew John described him of being, a dangerous, violent and terrifying person. According to his own daughter Diana, he was a power-hungry lunatic, he was also arrogant to the point where he believed the Blackwell family are the superior race of witches, and he was rarely caught by surprise.

John Blackwell was an extremely powerful witch and probably the most powerful witch we have seen so far, due to his Blackwell bloodline. The mere mention of his name has struck fear and acknowledgement of his powers from many characters throughout the series. He was shown to be able to spell many crows to circle around the Blake family's house and then die. He was able to successfully spell Jake with a curse unbeknownst to anyone, which made him hallucinate and suffer from agonizing pain and potential death. He was able to cast a spell in order to successfully control Jane, a powerful Elder. He was then able to single-handedly and without assistance completely obliterate a demon that possessed Samuel despite the fact that it was said that demons can only die from being drowned or being put on fire or with the help of any of the family crystals. This is very impressive considering the entire circle could not even halt Samuel's movements and Cassie with her dark magic was unable to as well.

John has shown to be very skilled in making potions, as he was able to concoct a potion that was able to destroy the love between two people as shown with Cassie and Adam. He was also able to remake the Witch's Cruid Jane made for him into her own without her even knowing. During Family his goal was to kill the entire witch line, except for the Balcoin/Blackwell blood. He referred to this as "cleansing" to keep witches magic at it's "purest", making John a somewhat of a Dark Magic Supremacist. Cassie and Diana both used their dark magic on the crystal skull to reverse the spell that would make every witch burn from the inside out. Since they reversed it, it burned him instead.

Much of their past is unknown, but it is known that they had a romantic relationship and their union lead to the birth of Cassie Blake. However, after their daughter was born, their union had some troubles, following a conversation between Sara and Richard Armstrong, stating that Amelia couldn't forgive John because of his betrayal. The betrayal most likely was the fact that John slept with Elizabeth, which resulted in Diana being born. It is unknown whether Amelia knew John was still alive.

Elizabeth and John had an affair when Elizabeth was going through a rough patch with Charles which led to getting her pregnant with Diana, which explains what Sara Armstrong meant by John betraying Amelia.

Everybody thought John died in the Boatyard Fire sixteen years ago. However, while in Jake's memory, Cassie saw him leave the boat, implying he was still alive. In the episode Return, he came back to Chance Harbor and appeared at Cassie's door. As Adam arrived, he left and gave his daughter a meeting place at the boardwalk, where later in the evening, he asked her to return the medallion. After arguing for a couple of minutes, Cassie left and was captured by Witch Hunters. Jake, John and the Circle helped to rescue her from the control spell. It seems he cares for his daughter as he was hurt by her anger and told her he never showed up again in order to protect her. He also trusts his daughter, being deeply convince she was strong enough and could fight the spell on her own.

John had an affair with Elizabeth Meade which resulted in another daughter named Diana. He is Diana's biological father though Diana herself wasn't aware until Cassie told her. He knew Diana is his daughter though he hasn't told her. Diana would eventually inherit dark magic traits like him and Cassie. He continues to help Diana and the circle through some tough times against the witch hunters.

John came by to thank Jake for saving his daughter and the two would work together. John learned from Jake that Ethan might be a traitor from the boatyard fire. John used magic on Jake to seperate Adam and Cassie. John convinced Jake that he can be redeemed for his mistakes.

Dawn and John were close during their time in the Circle. Dawn worshipped John due to his powerful magic which Dawn is totally drawn to. In episode Lucky, John meets Dawn again years later at the high school. Dawn misses John although the reunion wasn't what she thought or hoped it would be. In Crystal, Faye found her mother's diary from years ago which describes their relationship, but John denied the relationship itself when Faye confronted him. In Traitor John reveals that he and Dawn tried to get pregnant but it didn't work as Dawn was already pregnant with her husband's child.

The two were allies while they were in the circle and are now enemies. John had an affair with his wife and a daughter without Charles knowing about them. John asked Charles for his help which Charles refused due to him hating John. Charles was prepared to kill John with Jane which falied. John spared Charles because he has use for him. John and Charles had a fight after Charles learned the truth from Diana and was going take Diana away from John. John asked Dawn to stop Charles from taking Diana away from Chance Harbor.

John had a rivalry with Ethan over Amelia. He kept Amelia and Ethan apart so he could be with Amelia. Ethan gave Eben the power to kill John and the witches using a sway that John found in the fire. John encountered Ethan again years later and asked him where to find Cassie, Ethan told him to leave. John got stabbed in his chest by Ethan which Cassie saw and runs after him, Cassie uses her dark magic to make something knock him to the ground, John stops Cassie from killing Ethan though. He came to see Ethan about him helping the witch hunters. He kept his secret as long he kept Cassie's secret.

John was despised by Jane due to his hold on Amelia. Years later, John visits Jane and tells her about the curse he used on Jake, so that he would manipluated Cassie and Adam from being together. He came to visit Jane only to be trapped by her and Charles. Jane asked him about Amelia's death which John wasn't responsible for. Jane got killed by the cruid that John has switched for her only.

John has a history with Eben. John was captured by Eben and the witch hunters, Eben lit up the fire to kill John until he used the medallion to escape. John encountered Eben again to find that he has power. He and Eben continue to cross path with each other.

John was close to Sophie due to her being a kind witch. John learned about medical herbs from her. He told Melissa that her mother loved her very much.

John mentioned he and Thomas were good friends.

When Faye read her mother's diary, she realized that she and John were secretly hooking up around the time she was conceived. That lead her to believe that he was her father. This proved to be incorrected though, when he denied it and Diana was revealed to be the other Blackwell child. However, John did seem to care for Faye and told her that even if her biological father was not there for her, he was.

Other than the children he has from the Chance Harbor circle he produced four other children from the eastern circles, two childern are born from each of the three circles. He has one other daughter and three sons. He met each of them before meeting Cassie and Diana. He planned to bind his six children together to form a dark circle. 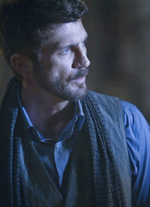 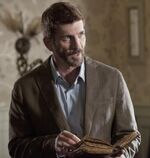 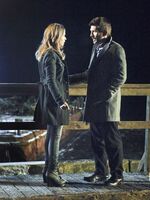